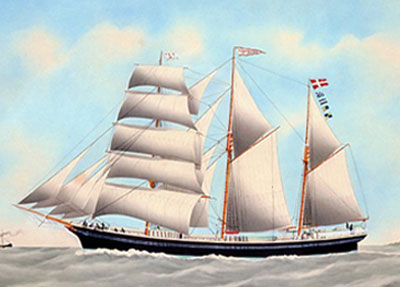 In my book "Kromann - a Family Chronichle from Marstal" which, unfortunately, is written in Danish only I have a loose end. Hoping that maybe some American descendants of the persons mentioned below might some day find this posting, and contact me (use "Kontakt mig" in the menu left), here are some details about the descendants of my great grandfather’s brother, Lorenz Benson Kromann.

Lorenz Benson Kromann (I have seen his name spelled in various ways: Lorentz, Lorens, Benzon, and others), was born in 1838 in Marstal, a small town on the island of Aeroe, Denmark. He died in 1906. He was a captain on the ship he took over after his father, "Frederik den Syvende" (named after the king of Denmark Frederik VII) until 1894. After that he took over the position of harbour master.

In 1869, December 17th, he married Caroline Christine Nielsen, born in Flensburg in 1838. I do not know when she died, probably in America some time after 1912, see below.

Karoline Albertine lived with her parents in Nørregade 12, Marstal, until she married. According to the 1901 and 1906 censuses she was a ”fashion merchant”. I guess she owned a women’s dress shop. In 1907, November 1st, she married Johan Albertsen who was a carpenter, born November 5th, 1876 in Marstal. He died in Cleveland, Ohio, March 9th, 1920.

Johan Albertsen and Karoline Albertine apparently decided to emigrate to USA. In 1911 Johan arrived with the ”Mauretania” at Ellis Island, NY, to start his new life in America. On the passengers’ list he is noted as ”single” which is obviously an error because he and his wife already had a son, born in Marstal in 1908, and a few years later, in 1914, they had a daughter in Cleveland, Ohio. Anyway, Johan's wife, apparently, seems not to have accompanied him on the Mauretania, but came to the US later that year (in the 1920 Ohio Census they have both been listed as immigrants of the year 1912)

On August 28th, 1912, the year after Johan’s arrival, his mother-in-law, Caroline Christine Kromann, now aged 73 years, arrived at Ellis Island as well, accompanied by her eldest daughter (Karoline's sister) Kirstine Margrethe Kromann. They traveled with the ”C. F. Tietgen”. Kirstine Margrethe was at that time 41 years old and unmarried. I am pretty convinced that she stayed unmarried until she died, thus leaving no descendants.

It is strange that, according to the passengers’ list for C. F. Tietgen, both Caroline Christine Kromann and her daughter Kirstine Margrethe were already American citizens on their arrival. If this is not a trivial error made by the immigration authorities (and they made a lot of errors) this would mean that they had also lived in America before 1912. But is it possible that they could have been granted American citizenship after only 3-4 years?

1) Johannes Bensen Albertsen, born in Marstal 1908. He is probably identical with John B Albertsen, whom I have found on a list of foreign soldiers serving on the American side in World War II. He was serving in Hawaii as a Military policeman, his army serial number was 35311402. His civilian occupation is given as ”Horsebreaker”. I guess that is a person who domesticates wild horses. I do not know when he died.

2) Sophie Albertsen, born March 16th 1914 in Cleveland, Ohio. All I know about her is that she married George Bernard Coughlin in 1938. At some point he was a driver in Bridgeport, Connecticut. I have the name George Bernard Coughlin from the Marstal Museum homepage, www.marstallere.dk , a very comprehensive list of people born or living in Marstal, Aeroe, Denmark. But I am convinced, that this is an error. Probably, his name is Bernard G. Coughlin, born in 1913, April 5th, Social Security Number 277-14-5092. He died in 1986, Jan 18th, Cleveland, Cuyanhoga, Ohio. (Data from Social Security Death Index, and Ohio Deaths 1958-2002). His occupation is listed as "Truck drivers, heavy". Apparently he had his own business in trucking service. Sophie died in Cleveland, Cuyahoga, Ohio, in 1995, November 28. Her occupation is listed as Housewife/Homemaker.

As already mentioned, both Johan Albertsen and his wife Karoline Albertine died in March 1920, Johan only a week later than his wife. At that time their children, Johannes (John) and Sophie, were only 11 and 6 years old. In the 1930 Ohio census I have found them as "lodgers" in the household of Henry and Malinda Hausen, Lakewood, Cuyahoga, Ohio. This is probably yet another misspelling or misreading: No doubt their surname is Hansen, a very common Danish surname with the Americanized version Hanson.

Here are the names mentioned above arranged as a family tree:

In the old Kromann family album there are several pictures of persons that I cannot identify. Some of them can be seen below. I have a strong feeling that number 1a is Lorenz Benson Kromann, nr 1b then probably his sister Christine Marie Kromann.

Nr 2 is certainly connected with the American line: A bridal couple photgraphed in Chicago, but I have no idea who it is.

Nr 6a and 6b are two pictures, showing a young lady dressed up for a party in 1906. I presume that it is the fashion shop merchant Karoline Albertine Kromann, having her photo taken on the occasion of her engagement to Johan Albertsen, the year before their wedding, but I do not know for certain. Any help identifying the portrayed persons will be appreciated.

1a & b) These two pictures seem to be of the same age as a picture of my great grandfather, Rasmus Jørgensen Kromann. I have a strong feeling that the man is Rasmus's younger brother Lorens (or Lorenz) Benson Kromann. The woman, then, could be their unmarried sister Christine Marie Kromann who lived with Rasmus at the time of the 1890 census. Or it could be Lorens's wife Caroline Christine Nielsen. The photo of the woman was taken in Svendborg; that of the man was taken in Copenhagen. 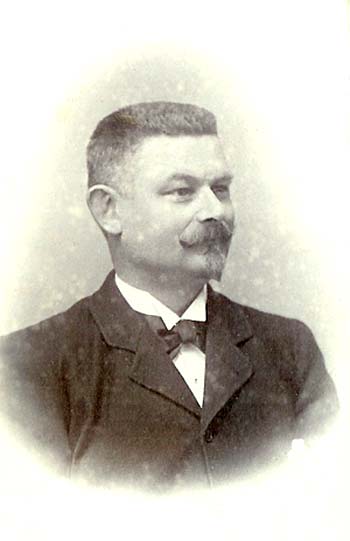 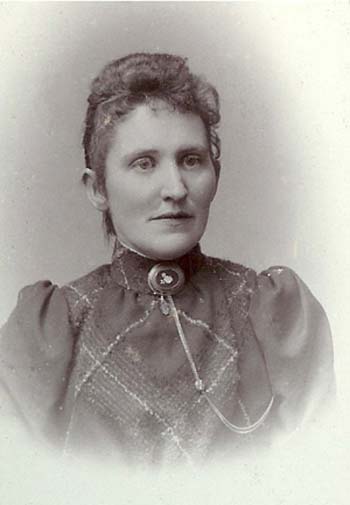 2) A Bridal couple in Chicago. Who is it? 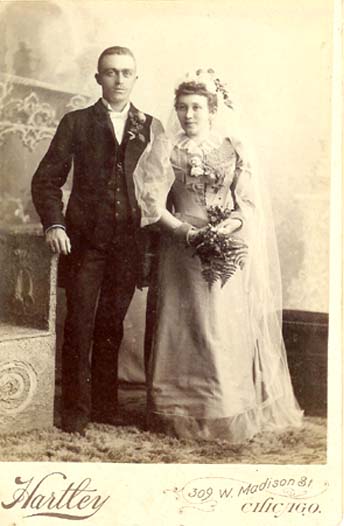 Other pictures from the Family Album 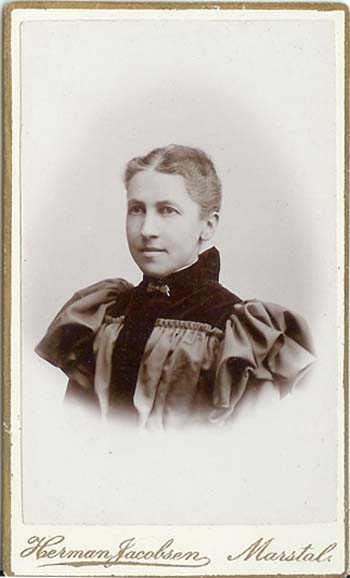 5a & b) Taken in Saxkøbing. On the back side of the picture a the woman is named Isseline or Asieline Koch, and the year is given as 1874. The dog is called Unças (?). Certainly very strange names. On the right side is a portrait, I guess it is the same young lady, taken in Marstal. 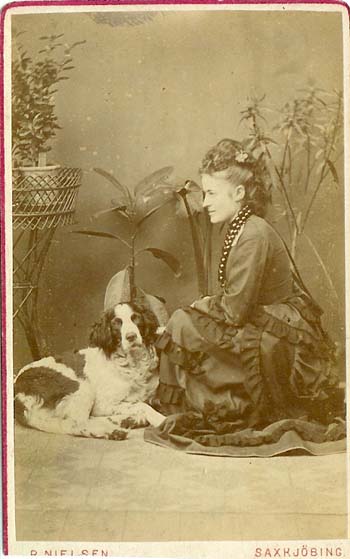 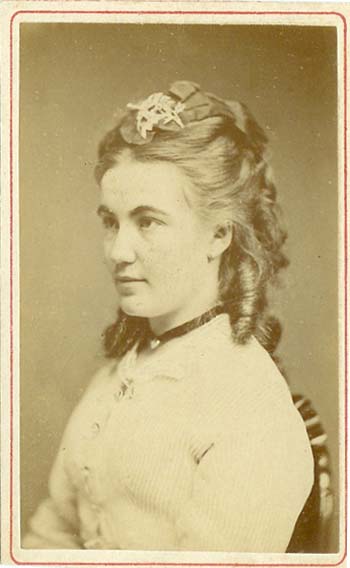 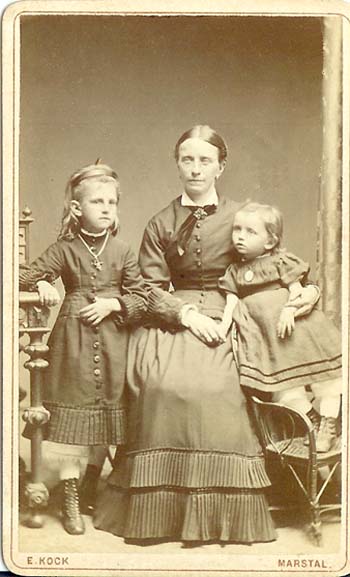 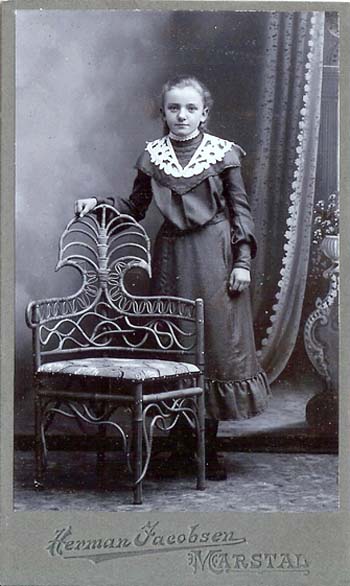 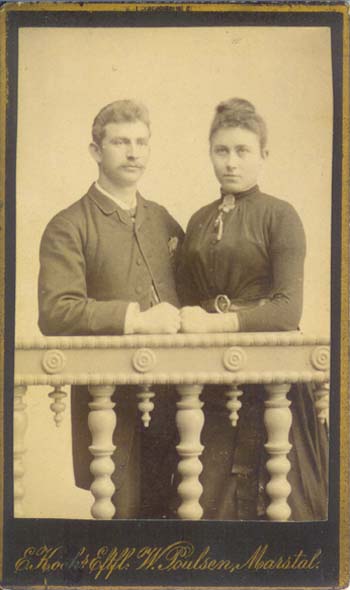 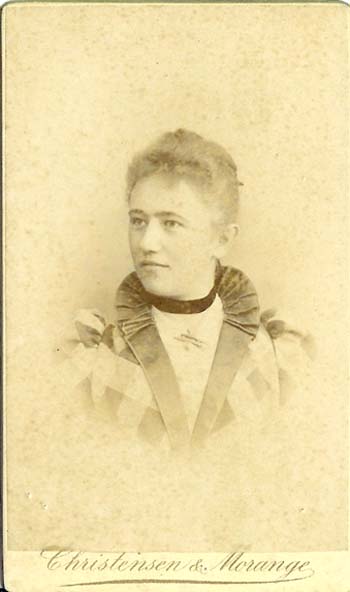 11) No indication of photoatelier. It seems to be a photo of a photo
12) This gentleman's picture was taken in France, Atelier F. Calmel & Cie. 5 Rue d'Espalungue, Pau 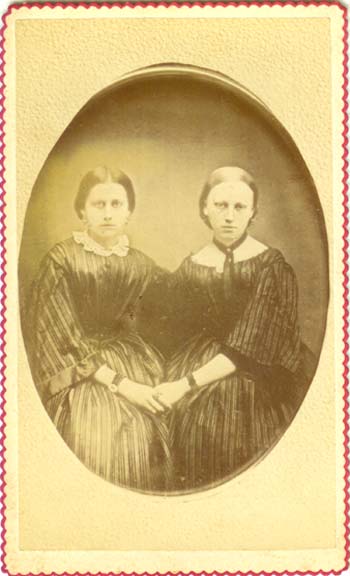 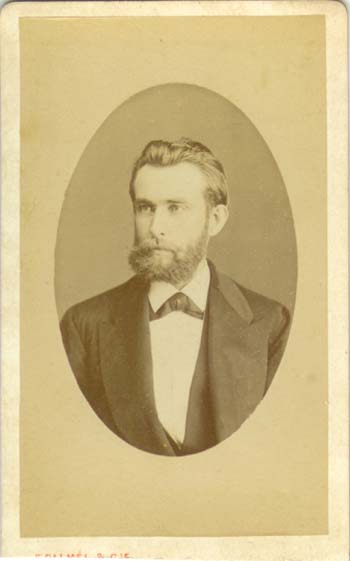 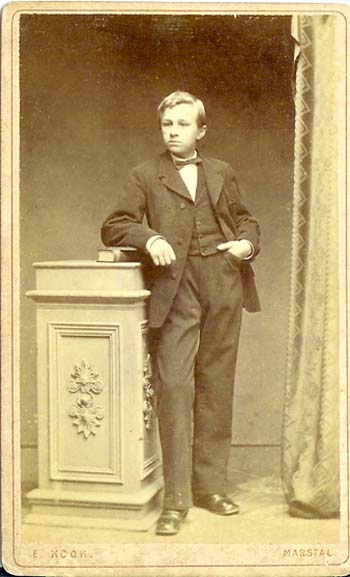 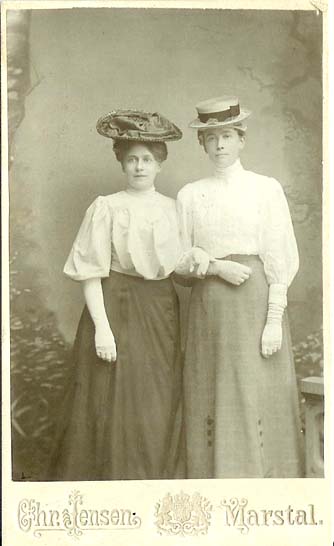 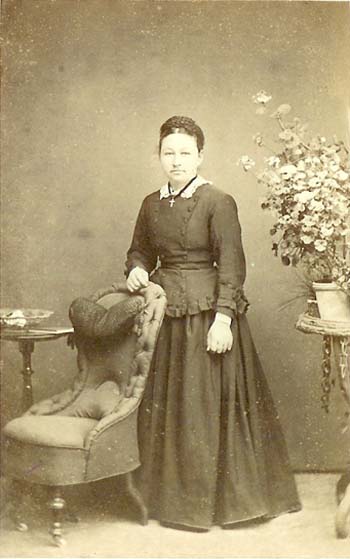 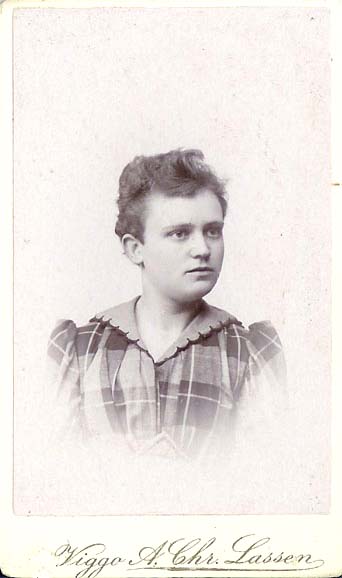